I rarely give it any thought when I head out the door and go out for a run.  I just grab my stuff, give my husband and/or kiddos a general idea of where I’ll be and who I’ll be with if anyone.  Most runs are run alone, and in the streets of Stockton, California.

If you know anything about Stockton, California, you will know that it has been ranked FIRST twice in three years as THE MOST Miserable City in the United States according to Forbes.  No joke, the city that I live in is considered miserable.  However, I’m one of those individuals that believes in perception, and making the best out of what your situation is.  I don’t see the city that I live in as “miserable” … Stockton has a lot of good points, it’s just unfortunate that only the ugly, bad parts are magnified.

Getting back on track to what I was trying to write … I run in a scary city, and I rarely, if ever, give it a second thought that I do.  Other people do … my husband worries, my mother worries, and a lot of people who I tell that I run in Stockton point it out to me.  But I’m not afraid, and I go out and run anyway … unarmed, but ready should anything happen.  I’m not saying that I’m invincible, nor am I saying that nothing will happen to me … I’m just saying that I don’t run afraid.  I am not afraid to run in my city, nor should I be.  I believe that if you run scared, your chances of something happening are heightened.

In early January of this year, in the city of Sidney, Montana … MONTANA … which to my knowledge is NOT a miserable city or anywhere close to it … Sherry Arnold headed out for her morning run, never to return again.  She was found seven days later, dead. It was later learned by her abductors, who were caught, that she was abducted at 0640 … she left her house at 0630.  10 minutes.  10 minutes was all it took.

Will it change how and where I run?  Maybe a little, but I doubt it.  I’m pretty aware of my surroundings, and I do tell my husband, and others where I’ll be.  I’ve been good about running with a partner when one is available, or my husband and kids  have been known to run or ride their bicycles or skateboard beside me, and I do run with my phone.  There are some good apps out there such as Bluelight that can track you or alert someone if you have not returned at a certain time point.  For the most part though, like I said, I just use the old fashioned, “Hey, I’m gonna be out at such and such place running.  I should be back at  such and such time.  Okay?”  I know … scary! 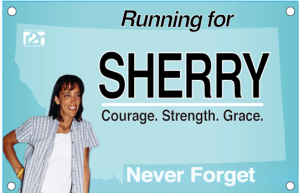 I will be taking some time out to run a few miles in Sherry’s honor because I know that it could very well have been me.  She was my age.  She was a mother, wife, math teacher, runner … she is us.  So with that, I ask you to take some time to run for her.  If you’re already running a race, dedicate a few miles in her honor.

I ask you to be more cognizant when you’re out there – especially when you’re alone.  If you can, run with your phone – I know that a lot of us do these days, and it’s not a bad idea.  Let your loved ones know where you are going to be.  Run with a partner – it’s always funner that way anyway.  Make eye contact with people who you come into contact with.  Just be careful when you’re out there, but don’t run afraid.  If you’re afraid, then your gut is trying to tell you something and your gut is usually right.

If you’re around on Saturday and live in Stockton, I’m planning on a short 5-6 mile run around the Spanos Park area.  Download your bib and come run with me and then we’ll go have breakfast somewhere … You don’t have to be fast … Those who know me, know that I will never leave you behind.  =)