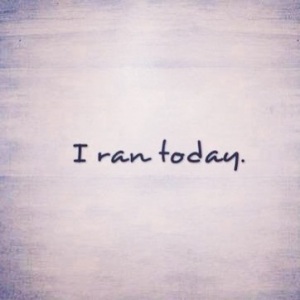 “I ran today.”  It seems like such a little thing to say, so simple, and seemingly so insignificant until you can’t do it.

I’ve been running my whole life.  It’s been a long standing joke that I’ve been running once I exited the birth canal 40 something years ago and haven’t stopped since.  Mind you, I am FAR from elite status, but regardless, I consider myself a runner.  I have always loved it – the feeling of freedom that it gives me, the feeling of strength and power that my body feels, the feeling of sheer determination when I want so much to just be done with the run, especially when its a difficult run.

I won’t lie … I took my ability to run for granted.  All my life, I just ran. I’ve had a few minor injuries here and there, but for the most part they were easy to recover from and then I went about my business and started up again once I was healed.  But seven months ago, I blew out my knee in a freak accident during the CrossFit Open WOD 13.4.  5 months ago, I had surgery to repair my injured knee.  When I was finally cleared to start exercising again, I thought for sure I’d just be able to just jump back into where I left off … WRONG!!!  Oh so WRONG!!!  I tweaked my knee more than once thinking that I could just pick up where I left off.   It has been a difficult recovery, more mentally than physically.  I have had to check my ego more than once, and I’ve learned to accept the fact that my knee would not heal completely if I didn’t just SLOW down and take the time to let it heal.

For the last 2 months I have been working once again with my trainer, Gabe Subry at CrossFit 209 Sport, and my Physical Therapist, Todd.  These two have been relentless in my training.  They both understand my need to get back in the box and into running.  They have both been patient with me and have been working with me to get me back to the level of functioning that I once was at.  At CrossFit, Gabe has me doing MECHANICS ONLY, meaning that I am only to practice and perform the movements with light to no weight at all, adding weight on slowly.  During my Physical Therapy sessions with Todd, he has been working on resetting me neurologically. I have had some really BAD Post Traumatic Stress Disorder (PTSD) since my injury.  I have been afraid to jump, run, and do a lot of movements out of fear that my knee will buckle. A lot of the exercises that Todd has me doing have been helping to reset my thinking and get me back into  training mode. He has a lot of tricks up his sleeve that have been helping me overcome my fears.  I am thankful for these two – more than I can ever express in words.

I’ve been itching to run for soooooo long.  I had pre-registered for several races prior to my injury, but  I was most disappointed that I had to cancel and bow out of my beloved race at the Half Moon Bay International Marathon in September.  I’ve run that race since its inauguration! It’s my favorite run of all time, so you can imagine my disappointment to have to drop out!   I was not even disappointed when I did not get chosen to run the Nike Women’s Marathon this year and I love that race because I’ve always run it for my dad.  So when the opportunity arose to sign up for another half-marathon, I was slightly hesitant, but I felt compelled to do so.  Enter the St.  Joesph’s Stockton Half Marathon – I could run that, I thought. So I signed up.

The venue this year started and finished at the University of the Pacific (UOP).  The course differed slightly in that rather than running down March Lane, it was more on the levee all the way down to Ladd’s Marina and into the residential area of Brookside, back up to the levee and into UOP.  I loved it – it was scenic for the most part – lots of pretty houses and boats – perfect for dream building. I am truly thankful to have run with my friend, Anitra, she was an amazing source of strength for me during the run!  I love the free photographs that comes with the race! I love the after party – beer (not that I drink) and burritos!!! Starbucks had a barrista bar providing coffee to the runners and spectators.  The medal was amazing!  It’s just a fun little race that packed a lot of punch. Bonus, it was a BEAUTIFUL day for a run and it was less than 10 minutes away from my house!

So, yes, for me to say, “I ran today,” is a HUGE accomplishment. For me to have run my first half-marathon 5 months post-surgery without (yes, WITHOUT) any sort of training is … INSANE! But … I did it!!! To think that there was a time when I literally felt cut off at the knees, to have finished a half-marathon … well, yeah, I have sooooo much to be thankful for.  I am so very thankful and feel so very blessed to have the ability to run once again and to be back out on the road – running!!!